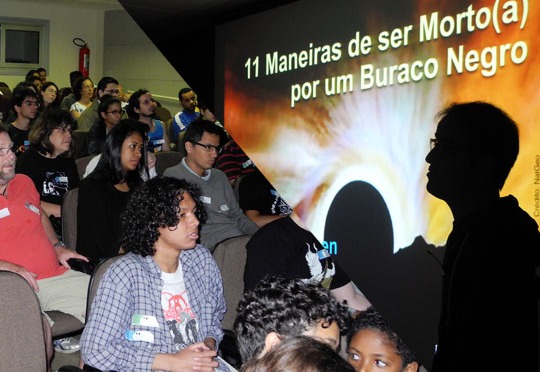 A couple of weeks ago we had at USP a “scientific open house” — Virada Científica: we opened the doors of our institutes to the general public for 24 hours. The proposal of this event is to have the scientific equivalent of the Virada Cultural that happens throughout São Paulo for 24 hours.

IAG had over 1500 visitors and we had exhibitions about astronomy, geophysics and atmospheric sciences. This included an inflatable planetarium, an earthquake simulator and other cool stuff.

My contribution to the event is that I gave the final presentation of the night at IAG: 11 ways a black hole can kill you. Over 100 people attended the talk, and I was bombarded with questions from the audience. For instance, I estimate that there were 40 minutes of questions and discussion with the audience following the 45 minutes-long talk! People were curious about: what is the biggest black hole ever discovered? (this one was asked by a ten year-old) What happens inside a black hole? What are white holes? Hawking radiation? Wormholes? Anti-matter? Why are jets launched perpendicular to the disk? (good one!)

I always take the questions following a talk as an indicator of how successful the talk was. In this case, I interpret this as indicating a successful presentation.  🙂